Dry conditions most of next week, chance of rain Thursday

The chance of rain Saturday night can’t be ruled out, but much of the rain activity looks to dissipate once it gets closer to land.

Best chances of rain look to be at the higher elevations and in Santa Barbara County.

A Small Craft Advisory is in effect until 9 p.m. from Point Piedras Blancas to Point Sal Westward.

Mother’s Day should have dry, clear and warm conditions for most of the Central Coast with low-70’s for coastal valleys and low to mid-80’s inland. 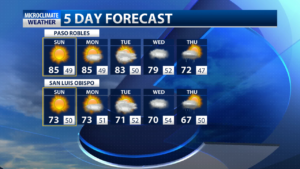 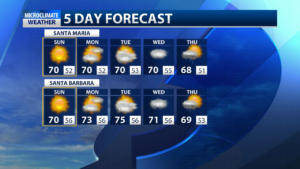 Some coastal areas will see morning marine clouds Monday, but most can expect clear to partly cloudy skies.

This marine layer looks to deepen into the week.

Temperatures look to take on a cooling trend by Wednesday, but onshore winds will help keep conditions seasonally normal.

By then, coastal valleys will see temps in the mid-60’s and inland valleys in the mid-70’s.

There is another potential for rain Thursday as a low pressure system makes it way to the area Thursday morning.

However, models do not agree on the amount of rainfall, if any, so this will have to monitored.

After this, skies will go partly cloudy and temperatures will cool down a bit, dropping just below normal Saturday.