Saturday was another toasty one for the Central Coast, with many interior valleys reaching above 100 degrees!

We have a heat advisory in place until Sunday at 9 p.m., stretching across most of the valley areas of Santa Barbara and San Luis Obispo Counties. 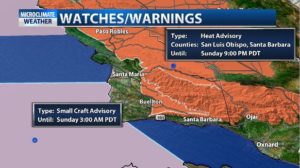 Temperatures are going to remain around five degrees warmer than seasonal through Monday, before a downward shift in temperatures begins. 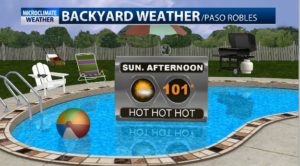 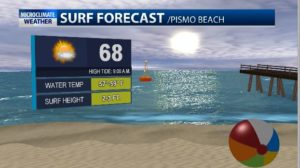 Temperatures are expected to be near “normal” summer weather by Tuesday, as the high pressure system moves eastward.

But it’s not the last of the heat — we’re expecting the high pressure to return late next week, leading towards another triple digit weekend! 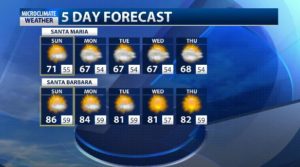 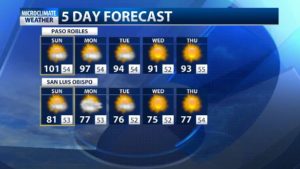 On top of our high temperatures, some areas are seeing low relative humidities and strong winds, adding to fire weather dangers.

Heat advisory in effect for the SB Co interior & mountains, including the Santa Ynez & Cuyama Valley, July 27 – 28. Temperatures of 97 to 107 degrees are expected. Drink more fluids, stay out of the sun and in air conditioning if possible, & check on your family & neighbors. pic.twitter.com/5b8cTuLLUN

Our small craft advisory expires Sunday morning, but winds are anticipated to strengthen Monday into Tuesday.

Along with the strong winds, comes patchy dense fog for some of our coastal and valley areas.

We are safe however from the chances of a monsoonal shower heading our way.

Certainly a dynamic few days of weather ahead!